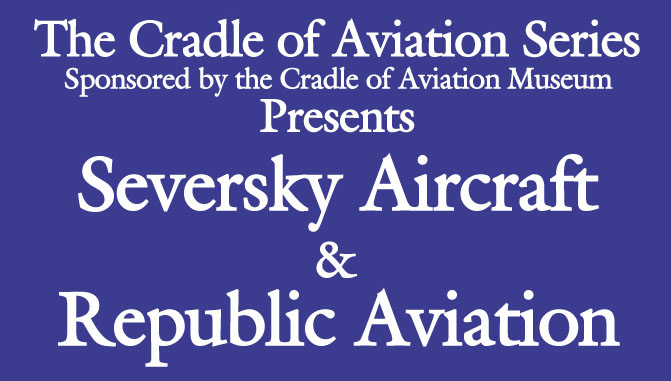 In April of 1939, after losing more than $550,000 dollars the year before, the board members of Seversky Aircraft voted Wallace Kellet in as President of the corporation and Major Seversky lost control of his beloved company. By September, the company had been reorganized and renamed Republic Aviation Corporation. Seversky did not go without a fight. By the time Seversky was finally satisfied with the settlement, it was well into September of 1942.

Meanwhile, the Air Corps made an effort to keep the new company afloat by awarding Republic a contract for 13 aircraft based upon the Seversky’s AP-4. Designated the YP-43, these along with P-35, EP-106 (an export version of the P-35 for Sweden) and 2PA-204A Guardsman kept the production lines open and allowed Republic to retain the core of its skilled workforce.

The YP-43 contract was truly based upon more than keeping Republic operating. The decision was also predicated upon the outstanding performance of the AP-4. Much to the delight of the USAAC, the AP-4 proved to be even faster than the Spitfire Mk.I above 22,000 feet. Although the major contract had been awarded to Curtiss for the low altitude P-40, the Air Corps was well aware that much of the aerial combat now underway in Europe was being conducted at higher altitudes than that which the P-40 was capable of operating at with any reasonable level of performance. 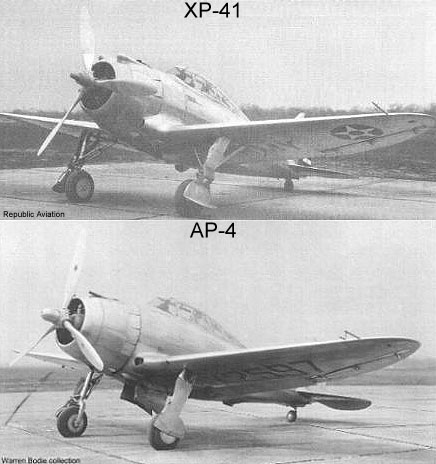 In this composite photo of the XP-41 and AP-4, the differences between
the two are evident. The AP-4 has a superior landing gear design. You can
also see the turbo-supercharger beneath the rear fuselage of the AP-4. The
XP-41 uses a different air intake than that in the AP-4's wing root. The XP-41
uses a Curtiss Electric propeller, the AP-4 employs a Hamilton-Standard.
The AP-4 was not the only U.S. fighter to employ a turbo-supercharger for high altitude performance. Curtiss was flying the XP-37 and the YP-37, Bell had built the XP-39 Airacobra and Lockheed had presented the high performance XP-38. Each of these aircraft used the Allison V-1710 V-12 engine and each was suffering teething troubles. Ultimately, the Curtiss fighter was relegated to the scrap heap. The Air Corps stripped the XP-39 of its turbo-supercharger, reducing the Airacobra to being one of the most ineffective fighters of its day. The XP-38, after years of development, would eventually go on to be one of the finest fighters of the war. However, it would not be combat ready until well into 1942. 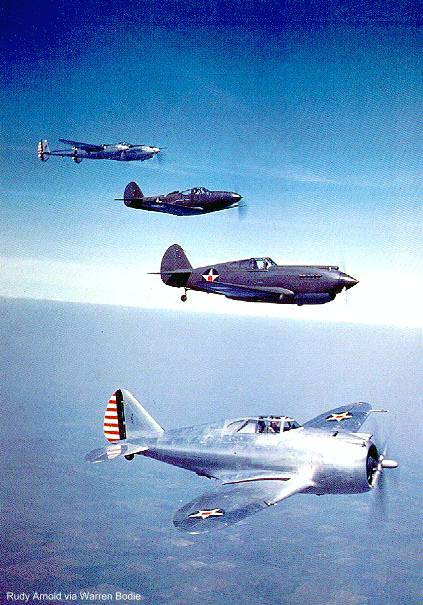 A rare and beautiful photo of the new USAAC fighters of 1940.
In accending order, a YP-43, an early P-40, a P-39C and a YP-38.
Special thanks is in order to author Warren Bodie for his
generous permission to use his personal photos in this story.
Once a contract for the 13 YP-43 fighters had been issued, Kartveli and his team began refining the AP-4, reducing the amount of glass behind the cockpit and moving the air inlet from the leading edge of the wing root to a location below the engine. This resulted in the classic oval cowling that continued with the P-47. The redesigned cockpit glass would also be carried over to the Thunderbolt. 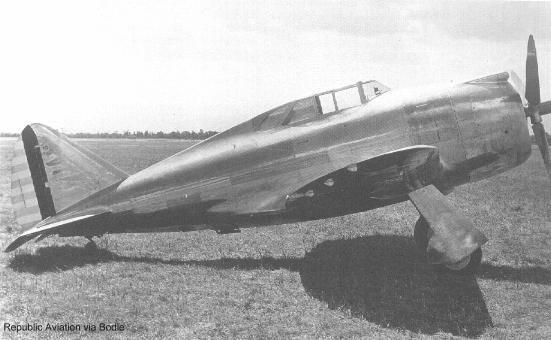 One of the YP-43 aircraft with the original tail wheel installation.
The contract called for certain performance guarantees. Maximum speed was required to equal or exceed 351 mph. The YP-43 bettered that by 5 mph. The fighter was required to climb to 15,000 feet in 6 minutes or less. The YP-43 was able to exceed this by nearly 400 ft/min. The first YP-43 took to the air for the first time in March of 1940. While it lacked armor and self-sealing fuel tanks, it provided the USAAC with its first fighter that could offer performance on par with the fighters now doing battle over Europe. However, with only 13 currently on contract, the fighter’s performance mattered little when the warring powers were putting up hundreds of high performance fighters with many more under construction. The realization that the United States was woefully prepared for a modern air war was not lost on the USAAC. The flurries of design activity were about to break out into a full snowstorm as America began to come out of her isolationist muddle.

Soon after receiving the first of the YP-43’s, the Air Corps discovered that although the new fighter was considerably longer than the P-35, it was no less prone to ground looping. Eventually, Republic redesigned the tail wheel assembly. The new design raised the tail of the aircraft nearly a foot higher. This reduced the tendency to ground loop and improved vision over the nose. The new tail wheel was no longer fully retractable. Eventually, 272 P-43 Lancers would be manufactured. Of these, 108 would be sent to the Chinese to fight Japan. But, not before many passed through the hands of the Flying Tigers (AVG). 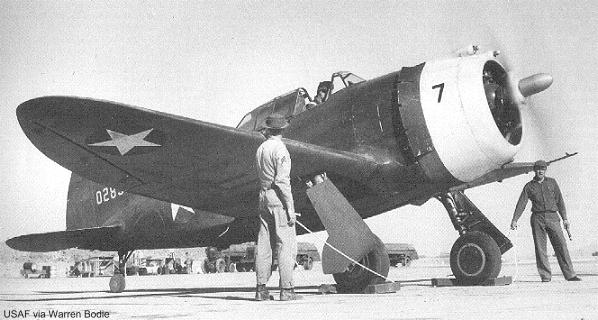 A P-43A in USAAF Training Command service, circa 1942. Note the revised tail wheel assembly.
Claire Chennault utilized some of his AVG pilots to ferry the newly arriving P-43’s to the new owners. In general, the Flying Tigers were much impressed with the P-43. They liked its excellent speed at high altitude. This was something that their Curtiss Tomahawks lacked, having only a single stage supercharger. The little barrel bellied P-43 made good power right up through 30,000 ft. The Tomahawk, on the other hand, was running out of breath by 20,000 ft. The pilots liked the Lancer’s good handling and rapid rate of roll (although the Tomahawk was a fast roller as well). They were also pleased to see that the Republic fighter carried the same armament as their trusty Tomahawks, twin .50 caliber machine guns above the engine and two .30 caliber Brownings in each wing. The fact that the air cooled radial engine did not have a Prestone cooling system did not go unappreciated. The Curtiss could be brought down by a single rifle caliber bullet striking any portion of the Allison engine’s cooling system. This was not the case with the P-43. In short, there wasn’t anything not to like about the P-43. Some of the AVG pilots went to Chennault and asked if they could retain some of the Lancers for their use, alongside the Tomahawk. They pointed out that the Lancer could out-climb the Curtiss and get far above Japanese formations, something they could seldom achieve with their P-40’s. However, Chennault turned down their request, and believed that he had good reasons to do so. Perhaps the primary reason was that the first P-43’s delivered lacked armor and self sealing fuel tanks. The risk of his pilots being incinerated was certainly a real concern for Chennault. A few months later the AVG ferried additional Lancers in. These were P-43A’s equipped with both armor and self sealing fuel tanks. However, the self sealing tanks steadfastly refused to seal. They leaked so badly that Chennault displayed no interest in these either. The AVG would soldier on with their Tomahawks and a few P-40E’s until they disbanded on July 4th, 1942. Let us digress to earlier events at Farmingdale. In September of 1939 things were really beginning to jump at Republic. The Air Corps issued a circular proposal in that year calling for a lightweight interceptor. Curtiss jumped in with a lightened variation of the P-40 airframe designated the XP-46. Republic submitted a very similar design which the Air Corps designated the XP-47. Both aircraft offered the same basic concept: Build the smallest possible airframe around an Allison V-1710 V-12 engine. This was also the first design from either Seversky or Republic that was to be powered by a liquid cooled engine. The major difference between the Curtiss and Republic effort boiled down to Kartveli electing to use a turbo-supercharger. As it was, Kartveli’s design never moved beyond the mock-up stage and the XP-46 showed no performance improvement over the P-40. While the XP-47 program was underway, Republic engineers were looking to improve the performance of the P-43. The result was a contract to develop the lightweight XP-44. Based upon the P-43 airframe, Republic planned to install the Pratt & Whitney R-2180 engine in a reworked Lancer. However, this powerplant did not produce the expected horsepower and the design team upgraded to the Wright R-2600. This engine made a reliable 1,600 hp. Yet, it proved to be unsuitable for turbo-supercharging. Finally, good fortune smiled on the XP-44 in the form of the P&W R-2800 Double Wasp. With a contract for 80 examples in hand, Republic set out to modify a P-43 airframe to take the new powerhouse 18 cylinder engine. To understand how important the R-2800 engine was to become, it is essential to know that many of America’s best fighters and bombers of WWII were powered by this redoubtable engine. These include, but is not limited to, the P-47 Thunderbolt, the F4U Corsair, the F6F Hellcat and the B-26 and A-26 bombers. The R-2800 that was to be fitted to the XP-44 produced 1,850 hp. Later variants used in the P-47M and P-47N produced as much as 2,800 and considerably more (up to 3,600 hp) on dynamometers. Slowly, but steadily, work progressed on the XP-44 mock-up, now known by some at Farmingdale as the “Rocket” (an earlier design concept by Republic, the AP-10, was also called the Rocket). Performance projections were impressive. A maximum speed of 402 mph was expected at 20,000 feet. Climb rate should approach, or even exceed 4,000 ft/min. Armament was to consist of four .50 caliber Browning machine guns, two mounted above the engine and one installed in each wing. Fuel capacity was no greater than the P-43. With the increased thirst of the far larger R-2800 engine, range would be limited. There is little doubt, however, that the P-44 would have been an effective interceptor.

Bob Boyd's terrific illustration of the proposed P-44 is based upon photos of the XP-44 mock-up.
Unfortunately, the Air Corps did not need a short range interceptor. Indeed, as data from the European war was analyzed, it was becoming very clear that a fighter of far greater capability was going to be needed. The need to fly even faster, at greater altitudes, over longer distances was now evident. The Experimental Aircraft Division of the USAAC called in Kartveli and informed him that the XP-44 contract was cancelled. So was the XP-47 lightweight fighter contract. They had drawn up a new set of requirements and authorized a new contract to design and develop a new fighter that would be designated the XP-47B. The fighter had to meet these new requirements, some of which were: 1) The aircraft must attain at least 400 mph at 25,000 feet.
2) It must be equipped with at least six .50 caliber machine guns, with eight being preferred.
3) Armor plate must be fitted to protect the pilot.
4) Self sealing fuel tanks must be fitted.
5) Fuel capacity was to be a minimum of 315 gallons. Kartveli realized that the P-43/XP-44 airframe was not capable of being adapted to these new requirements. Therefore, he began sketching a new design on the train returning to New York. He kept the basic cockpit design, stretched the fuselage, reshaped the tail surfaces and increased the wing span. When Kartveli arrived at Pennsylvania Station in Manhattan, he had the basic outline of the fighter would ultimately break the back of the Luftwaffe in 1944.

Return to the Cradle of Aviation Museum